Urgency is a requirement in interlocutory proceedings / summary  proceedings. If it is not present, there is a considerable chance that the claims will be rejected. In general, a hearing in summary proceedings is scheduled within six weeks, but it can be much quicker if the case lends itself to it. If, for example, a company is presented unfavourably in a television broadcast, a hearing will be arranged before the broadcast. In this way, clarity can be obtained on whether the television broadcast may go ahead before the broadcast.

Other examples of interlocutory proceedings are

Often, various attempts have already been made to resolve a dispute. Proceedings are not ‘just’ any old how. Parties often no longer have confidence that a contracting party will comply voluntarily. That is why an order for incremental penalty payments is often made in preliminary relief proceedings, in order to either do something or not do something. For example, to prevent a broadcast from taking place or to order someone to provide the company’s administration. If the judgment includes a penalty, you have to be careful: as the defendant, it is important to comply with the judgment exactly and sometimes it is not entirely clear what should or should not happen.

Plaintif or defendant in summary proceedings

In both cases, the assistance of a lawyer is required. As a plaintiff, a lawyer is mandatory, as a defendant it is not, but it is often advisable, so that you know what can and cannot be done. 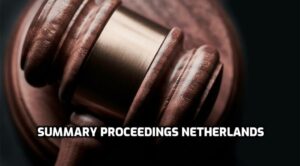